Akkitham's Irupatham Noottaandinte Ithihasam is widely considered as one of the first true modernist poem in Malayalam. Scroll down to read more about the legendary poet.

Legendary Malayalam poet Akkitham Achuthan Namboothiri, popularly known as Akkitham passed away on Thursday, October 15. He was aged 94. The poet was undergoing treatment at a hospital in Thrissur, according to reports, he breathed his last at 8:10 AM.

A glorious career comes to an end

Akkitham was born in Palakkad on March 18, 1926, as Akkitham Achuthan Namboothiri. At the age of eight, he wrote his first poem, with the pen name 'Akkitham'. After completing his schooling in Sanskrit, Astrology, and Music, Akkitham joined college but did not complete his graduation.

Akkitham started his career as an editor for Unni Namboothiri Magazine. He also worked as an assistant editor at Mangalodayam and Yogakshemam magazines. In 1956, he joined All India Radio.

Akkitham became a noted name in the world of Malayalam literature after the publication of Irupatham Noottandinte Ithihasam (Epic of the 20th Century), a khandakavya, which is widely considered as the first truly modernist poem in Malayalam. The book also won the Sanjayan award in 1952.

Apart from writing poems, Akkitham has also written critical essays and short stories. He was also the part of several social movements, that includes the Paliyam Sathyagraha, a peaceful protest against untouchability in 1947.

In 1996, he won the Lalithambika Antharjanam Smaraka Sahithya Award. He won the Vallathol Award in 1997. The poet got Vayalar Award in 2012, and it was followed by the Ezhuthachan Puraskaram in 2016. In 2017, the nation honoured Akkitham with Padma Shri. However, he could not attend the award ceremony due to ill health, and it was the Palakkad district collector who received the honour on his behalf. In 2019, he received the Jnanpith, the highest Indian literary award. 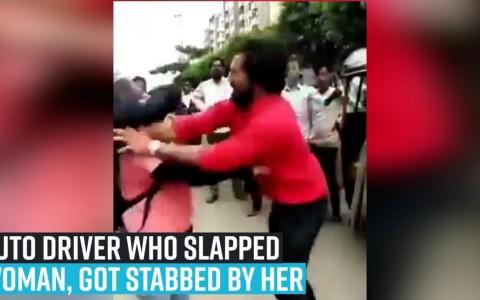 Close
Auto driver who slapped woman, got stabbed by her
Why advertise with us?
most popular