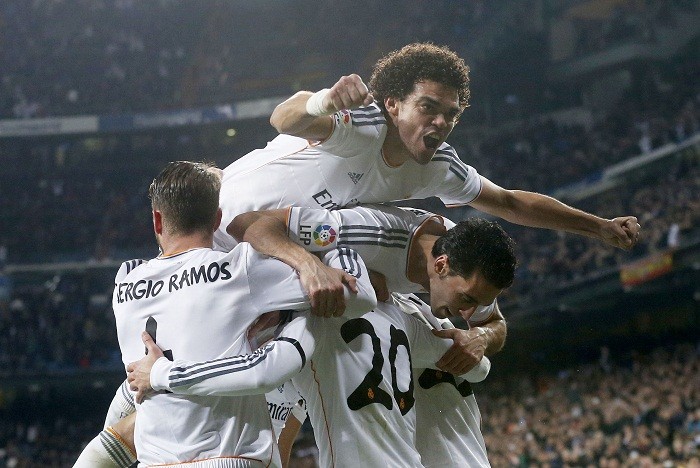 An El Clasico final moved one step closer to turning into reality after Real Madrid and Barcelona achieved comfortable victories in their respective semifinal first legs of the Copa Del Rey on Wednesday night.

Facing a third straight defeat at home against their crosstown rivals, Real brought out, according to manager Carlo Ancelotti, one of their best games under his reign -- a 3-0 victory over Atletico Madrid, the team that is currently flying in La Liga.

Two of those goals were a little lucky for Real, who had Cristiano Ronaldo playing from the start, while Gareth Bale was not even in the squad, but there was no doubting the home side's dominance at the Camp Nou against the league leaders.

"I am very satisfied with the match, everyone did fantastically well," Ancelotti said. "We did everything right. We were very effective in winning back the ball and we worked well down the wings. My wish is to have a team like the one that played tonight.

"But we have to stay cautious as we have only played the first half of the tie and Atletico will do all they can to turn it around."

There were plenty of incidents the last time the two sides met in the King's Cup - in the final last season, and this time around as well, there was more than enough needle, with tetchy fouls and play acting very much the order of the day.

Real goalkeeper Iker Casillas, back in goal, was the first to be put to the test, with the Spanish international keeping out a header from Arda Turan. However, four minutes after that 13th minute chance went begging for Atletico, Real were ahead.

Pepe bombed forward from the back before taking a shot from distance, which went on to hit Emiliano Insua and left Thibaut Courtois a mere spectator as the ball hit the back of the net.

The score remained 1-0 at halftime, but it was Real that struck the killer blow just before the hour, a little after Diego Godin missed a golden opportunity to equalise, with the in-form Jese Rodriguez slotting home after a brilliant through ball from Angel Di Maria.

Di Maria would then add the icing on 73 minutes, with his long-ranger taking a deflection off Miranda and with it leaving Courtois helpless yet again.

"They played a very good game and we have to congratulate the opponent for the way they played the game," Atletico manager Diego Simeone said. "We could not combine. We tried but could not find the way."

Earlier, Barcelona, coming off a disappointing La Liga defeat to Valencia at the weekend, also pretty much sealed a place in the final of the Copa Del Rey courtesy a 2-0 victory over Real Sociedad, who had Inigo Martinez sent off.

Sergio Busquets opened the scoring for Barca, latching onto a loose ball off a corner, before an Enaut Zubikarai own goal consigned Sociedad to a mountain bigger than Mount Everest to climb.

"We played a good game, we didn't take any risks," Barca manager Gerardo Martino said. "We were a bit apprehensive because of Saturday's game against Valencia.

The second legs will be played next week.

Rakhi Sawant's husband Ritesh to be part of Bigg Boss 15; here's why he couldn't make it in BB 14

Bloodbath at Dalaal Street: Here's why Sensex tanked more than 500 points on first day of week
Advertisement
Must Read
Advertisement