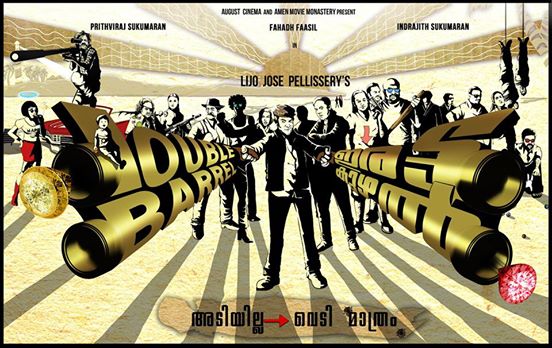 Malayalam film "Double Barrel" has created a lot of buzz since its announcement.

From the budget to star cast, everything about this upcoming film have been making news. Initially, Fahadh Faasil, Prithviraj and Indrajith were announced as the film's lead.

The latest rumour says that Fahadh has opted out of the film and Tamil actor Arya will replace him.

The makers of "Double Barrel" have been tip lipped in revealing any aspect of the film, which makes the latest report to remain as just rumour.

"Double Barrel" is directed by Lijo Jose Pellissery, who had earlier directed the 2013 romantic musical satire film "Amen", which had Fahadh, Indrajith, Swathi Reddy, Natasha Sahgal, Rachana Narayanankutty and Kalabhavan Mani in pivotal roles. It was one of the well received and successful films of the year.

The film revolved around the events that happened in a village named Kumarangiri with the arrival of a young priest Vincent Vattoli (played by Indrajith). The film was well received by the critics as well as the audience. It became a box office hit by grossing ₹8.12 crore.

For Arya, this will be his first appearance as a lead in a Malayalam film. He was earlier seen as a supporting actor in Santhosh Sivan's 2011 film "Urumi".

Apart from "Amen", the other directorial ventures of Lijo includes "Nayakan" (2010) and "City of God" (2011). But it was "Amen", which cemented Lijo's position in the industry as a commercially viable director.

Meanwhile, the shooting of "Double Barrel" had begun in Kochi by July end. The film is said to be shot in a lavish set, which is said to be the first of its kind in Malayalam. It will also be shot in various locations in Goa.

The music of "Double Barrel" is composed by Prashant Pillai, who had done music for Lijo's earlier films and the cinematography will be handled by Abhinandhan Ramanujan. The film is produced jointly by August Cinemas Pvt Ltd and Amen Movie Monastery.