US President Donald Trump has won a historic endorsement from NYPD Benevolent Association, which is touted as a first for the union.

US President Donald Trump wins historic NYPD union endorsement ahead of November election, a move that is seen both as a big win for the president and a reason for heavy criticism for New York Police Department. The New York City Police Benevolent Association, which is made up of 24,000 NYPD officers, endorsed Trump, an extremely rare thing for the union.

Pat Lynch. the president of the NYC PBA, was all praise for President Trump and said this is the first time the union has endorsed any presidential candidate in his career. Lynch has been in the law enforcement for 36 years and held the post of NYPD PBA boss for 21 years. Moreover, Lynch said Trump earned the endorsement with his support to the law enforcement.

"I cannot remember when we've ever endorsed for the President of the United States until now. That's how important this is. We need your strong voice across the country," Lynch said at Trump's Bedminster, New Jersey golf club.

Lynch recalled taking a neutral stand during the 2016 election, but the decision to endorse Trump this year is supposedly the need of the hour. He said the union could no longer sit on the sidelines as the voice for "Defund the Police" grows stronger.

Trump thanked the union for its support and took a strong jibe against Joe Biden, his presidential rival candidate.

"Thank you to the great Pat Lynch & the @NYCPBA I will never let you down!" he said.

"Our country is suffering from a radical far-left movement...that is trying to defame, demoralize, defund, dismantle and dissolve our great police departments. It's a left-wing war on cops. If Sleepy Joe Biden were to become president, he would immediately pass legislation to gut every single police department in America."

NYPD's endorsement of Trump traced a lot of backlash. This is how people reacted. 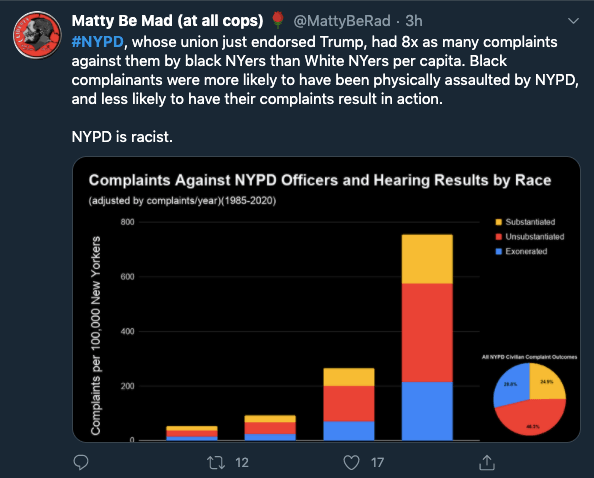