Actress Samantha Akkineni, who is self-quarantined after the COVID-19 outbreak, spoke about her reply to her haters and said that compliments make her lazy and insults propel her to give my best work.
7 days ago

The actress often keeps sharing pics of her pet dog Hash and husband Chay from different corners of the house and we are in awe of them.
22 days ago

Actress Samantha Akkineni has shared an endearing photo with director Nandini Reddy to recall her nervous excitement during the shooting of Oh Baby, which was released on July 5, 2019.
24 days ago

Samantha Akkineni has already watched Naga Chaitanya's upcoming movie Love Story and expressed her displeasure over actress Sai Pallavi's dominance in it. She has suggested some changes to his role.
May 4, 2020

Revealed! Not 'Jaan 'or 'O Dear', but THIS is the title of Prabhas, Pooja Hegde starrer

The shooting of the film is kept on hold due to the lockdown and further updates have been promised by the production house once the lockdown is lifted.
Apr 7, 2020

Is Samantha Akkineni ready to delay her pregnancy for Bangalore Nagarathnamma biopic?

Samantha Akkineni is all excited to play the title role in the biopic of Bangalore Nagarathnamma. The wife of Naga Chaitanya is said to be ready to delay her plans of starting a family.
Apr 3, 2020

'It was a bitter experience. I sensed that it could end up bad': Samantha on her relationship with ex

After breaking up with Siddharth, Samantha Akkineni fell in love with Naga Chaitanya and they got married in 2017.
Mar 18, 2020

Samantha is currently awaiting the release of Amazon Prime's The Family Man, season 2. This show marks her digital debut.
Mar 10, 2020

The photos of Ashu Reddy clearly proves that she is the perfect doppelganger of Samantha Akkineni. Scroll down to see the uncanny resemblance.
Mar 4, 2020

Prabhas 20 updates: Details of its release date and titles in consideration revealed

The buzz in the film industry is that the makers of Prabhas 20, which is directed by Radha Krishna Kumar, have finalized its release date and two names are considered for its title.
Feb 27, 2020

The actress is currently basking on the success of her recent flick Jaanu. Also, rumour mills suggest that she might team up with Trivikram Srinivas and Jr NTR for their next.
Feb 24, 2020

Samantha has recently signed her Tamil film with Vijay Sethupathi. Also, she is awaiting the release of Amazon Prime Video's The Family Man season 2, which marks her digital debut.
Feb 23, 2020

A video of Samantha Akkineni getting annoyed by a fan's behaviour and the actress warning her ot to take photos has gone viral.
Feb 22, 2020

Telugu film industry is facing a big set back at the box office post the release of Allu Arjun's Ala Vaikunthapurramloo (AVPL). Now, Vijay Devarakonda's World Famous Lover is set to break the jinx this week.
Feb 11, 2020
1 2 3 4 5 6 7 8 9 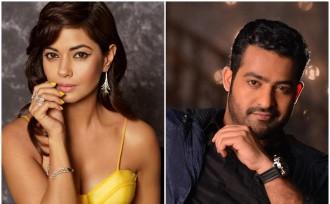 Meera Chopra on abusive Junior NTR fans: ''These people should not be left free to do crimes on women'
26 minutes ago
MOST POPULAR