Before testing positive for Covid - 19, let's take a look at the five times Big B battled serious ailments, received massive love and prayers countrywide and recovered.
2 hours ago

Coronavirus vaccine should reach those who need it, not highest bidders: Bill Gates

Bill Gates said efforts begun two decades ago to battle the global HIV/AIDS crisis, when countries came together to eventually make medicines available in most of the world including Africa, can serve as a model for making Covid-19 medicines widely accessible.
7 hours ago

On World Population Day 2020, Union Minister Giriraj Singh said that the rising population of the country has become a challenge for us.
7 hours ago

Goya Foods CEO Robert Unanue's views on US President Donald Trump has left many red-faced, so much so that a call to boycott Goya Foods started trending.
11 hours ago

WHO reports record daily increase in global coronavirus cases, up over 228,000

The biggest increases were from the United States, Brazil, India and South Africa, according to a daily report.
15 hours ago

The Premier League on Thursday confirmed that the Video Assistant Referee made three incorrect penalty calls during the Game Week 34.
1 day ago

Many Muslims are upset with Asaduddin Owaisi for welcoming Telangana CM KCR aka K Chandrasekhar Rao's decision to build a new temple and mosque at the new secretariat complex.
1 day ago

China said on Friday it would take "reciprocal measures" against the United States after Washington imposed sanctions on senior Chinese officials over alleged human rights abuses against the Uighur Muslim minority.
1 day ago

Telangana CM KCR said that in the new Secretariat premises, a new temple and mosque would be constructed on a more spacious spot even if it meant spending crores of rupees.
1 day ago

When the Genesis started marketing its products as a cure for COVID-19, the profits witnessed a nearly 400 percent increase in revenue to the tune of $123,000 that month.
1 day ago

More than 2,500 pilots have lost jobs among all Middle East carriers, and pilots in India have been affected too because of the unprecedented Covid-19 crisis, many can't join airlines back as their Indian license has expired or is about to expire due to archaic DGCA rules.
2 days ago

Kanye West received a lot of flak for his recent remarks on anti abortion and fetus pictures.
2 days ago 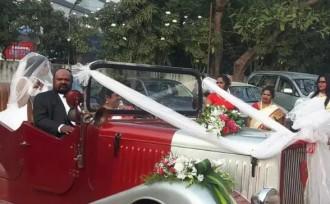 Just Married: Wedding Cars — A classic replica, a cab, or a real Jeep
6 hours ago
MOST POPULAR