'Internet will be a happier place without TikTok': Heena Sidhu

Indian Olympian and former world No. 1 in pistol shooting, Heena Sidhu rejoiced over the ban of 59 Chinese apps in India, especially the ban on TikTok.
6 days ago

'Feels good to be back out there again': Krunal resumes outdoor training

Indian all-rounder Krunal Pandya enjoys getting back to outdoor training after a long break due to the lockdown and pandemic.
6 days ago

The Sports Ministry has filed an application to the Delhi High Court seeking restoration of recognition for 57 National Sports Federations (NSF) whose recognition was revoked recently.
6 days ago

International Business Times India spoke to social media influencers, Barkha Singh, Ayush Mehra and Viraj Ghelani and asked them what are they watching on the web or the last show that they binged on!
7 days ago

'Your jobs are safe as of now': TikTok India head to Indian employees ahead of meeting with CEO

TikTok CEO Kevin Mayer will be engaging with the Indian employees of the ByteDance-owned mobile application as the fear of layoffs grew after the government of India banned the popular video-sharing service.
7 days ago

Abhishek Bachchan has said that it is a huge honour to be part of the film industry after completing his 20 years in Bollywood on Saturday, 20 June.
7 days ago

Although there have been talks on the table, there has been a little change on the ground. In fact, multiple satellite images have shown that China has ramped up defenses in all the areas of recent stand-off.
7 days ago

The clarification intimation is offered by SEBI under Regulation 30 of the Listing Obligations and Disclosure Requirements Regulations, 2015, by the HDFC Bank Limited.
7 days ago

Kangana Ranaut, who asked people to boycott Chinese products recently, has welcomed the government's decision on banning 59 apps from China.
7 days ago

China's parliament passed national security legislation for Hong Kong on Tuesday, setting the stage for the most radical changes to the former British colony's way of life since it returned to Chinese rule 23 years ago.
7 days ago

Captain Virat Kohli talks about the 2014 Adelaide Test, he calls it a milestone for Team India towards achieving the impossible even if they didn't quite make it.
7 days ago

The Railways had suspended passenger, mail and express trains during the nationwide lockdown from March 25
7 days ago

The first impact of Naandhi has been released today as Allari Naresh's birthday treat. The teaser has impressed the fans of the comedy actor and has got rave reviews from them.
7 days ago 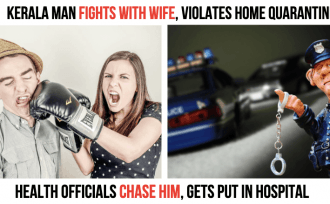