No Ted Cruz, even a magic money tree doesn't solve all the problems

The United States of America is the worst-hit nation by the COVID-19 pandemic, which has struck globally and brought the world to its knees. Businesses shut, economies slumped, jobs lost, and there's no relief from the deadly coronavirus. Amid all this, Ted Cruz, the Republican Senator representing Texas, thought it was okay to joke about coronavirus relief proposal.

Democratic senator Ed Markey of Massachusetts tweeted on Monday a relief proposal to support Americans during the challenging times of the pandemic. He said every person in the country should receive $2,000 a month during the pandemic. But his proposal was met with mockery at the hands of Cruz.

"Give every person in our country $2000/month for the duration of the pandemic, $2000/month for 3 months after that, and $2000/month retroactive to March," Markey tweeted. Cruz responded to the tweet with a sarcastic reply. "Why be so cheap?" he said. "Give everyone $1 million a day, every day, forever. And three soy lattes a day. And a foot massage. We have a magic money tree — we should use it!"

Cruz's remarks were quickly criticized by the masses. Netizens were quick to point out the joke was in bad taste. Some even pointed out how Cruz advocated for a multi-billion-dollar military budget and tax cut to wealthy businessmen. 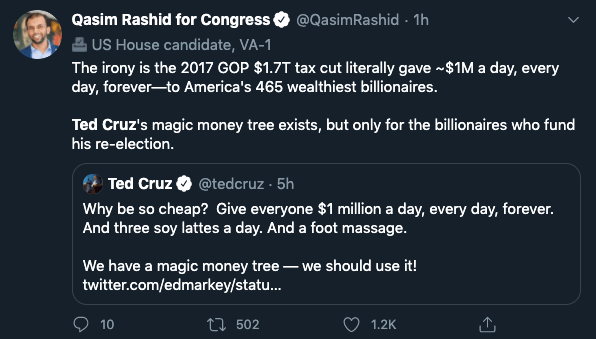 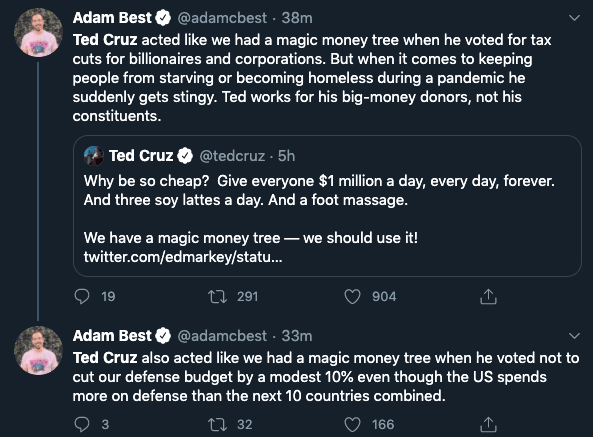 The entire world is grappled by the COVID-19 crisis and the US has recorded the highest number of coronavirus cases in the world. Despite several measures to contain the spread of the virus, there's no respite. People are still falling into the grip of the deadly virus and there's no vaccine in sight. All the vaccines are currently undergoing trials and it could be several months if not sooner for the masses to actually get a vaccine. But the challenge of treating millions of COVID patients remains.

So yes, perhaps a magic money tree can fund those treatments and development of vaccines, but it doesn't solve all the problems, like feeding the hungry, clothing the poor, and sheltering the homeless amid the pandemic.