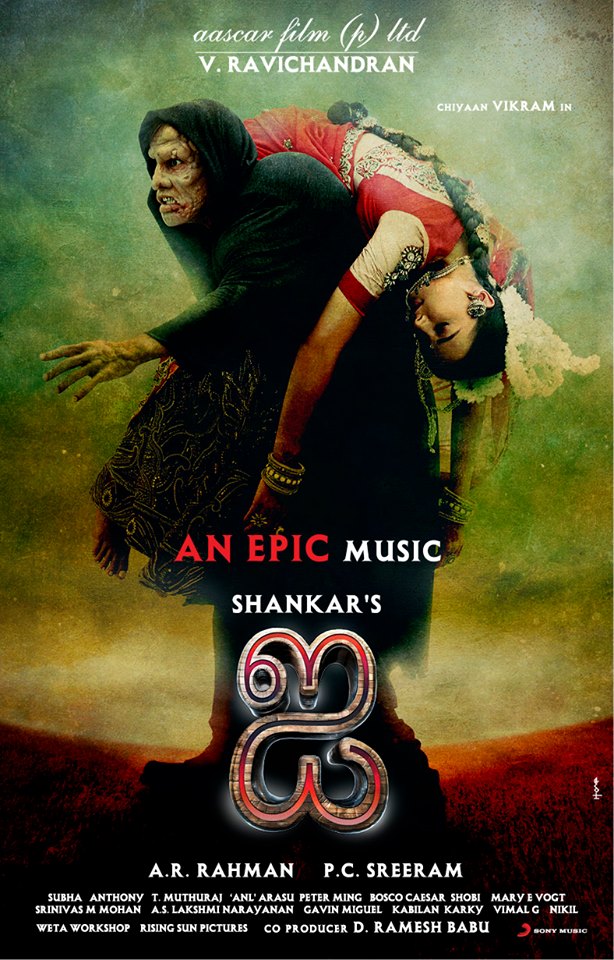 Director Shankar's much-awaited movie "I" ("Ai", "Manoharudu") starring Vikram and Amy Jackson in the lead roles, has released in Telangana and Andhra Pradesh on 14 January and garnered mixed reviews from Telugu viewers.

Written and directed by Shankar, "I" is a science fiction romantic thriller film, which revolves around the story of a village guy (Vikram) and model (Amy Jackson). The model becomes a brand ambassador for Olympics in Beijing, defeating the former brand ambassador (Upen Patel). How she makes the villager the most charming model in Beijing will form the crux of the story.

Vikram and Amy Jackson have played lead roles in "I" and both have done their best in the film. Vikram's sterling performance and Amy's glamour are among the main highlights of the film. Suresh Gopi, Upen Patel, Santhanam and Ramkumar Ganesan have played pivotal roles and their performances are also big assets of the movie.

Made on a whopping budget, "I" has rich production elements, which are on par with international standards. AR Rahman's music, PC Sreeram's cinematography, Srinivas Mohan's visual effects, Weta Workshop's prosthetic make-up and art direction are the big attractions of the film, say Telugu audience.

Many movie buffs took to their Twitter pages to express their views on "I". Here is the live update of "I" movie review by Telugu viewers:

Strictly Avg 1st half.. E Gay comedy Lu endi Ra saami.. #I.. Have to see how sankar handled 2nd half. #I definitely not a Shankar's range mvie to watch out.. Completely disappointed.. Can watch once for ARR music n songs.. Sankar sir.. U made my first Tamil FDFS experience terrible.. Crowd is on deep silence all the time :( #I

#I first half dragging big-time n predictable , but acting is splendid especially Amy is surprisingly good .

#I superb acting by Vikram and Amy.amazing lens work & BGM,special mention about song visuals,san comedy & makeup but movie is too lengthy. #I definitely not a Shankar's range mvie to watch out.. Completely disappointed.. Can watch once for ARR music n songs..

#I - at the halfway point..Shankar's magic is missing. All I can say is, it is a clear advantage for Gopala Gopala now.. I - costly disaster .. Sad but true.. Feeling very bad for Vikram, Shankar and Aascar

Very lengthy first half. Exotic locales of China, Vikram n Amy are superb. #I Very disappointed with #I . Best thing about #I is @iamAmyJackson . Technically good. This time if there is anyone to blame it's only Shankar. Exactlyyy "@DeepakKodela: Ego shouldn't out judge Edit. #I should be trimmed"

I must and should appreciate VIKRAM for his hard work salute jus he made #I #I is a movie which me hud dispointed. Some episodes of #I only #SHANKAR can do but the movie is not up to shakanr's MARK. Vikram Amy nice Pair PC ki salam shots awesome

#I #Ai - A visual Bonanza from Shankar, Vikram's dedication is unbeliveable. Too early too post a verdict. Good so far. #Ai #I @pcsreeram's camera work is truely equal to International Standard. #I - Visually great. As usual Shankar came with an out of the box presentation. Bt the story is unexciting, and the screenplay drags a bit. Everything seems predictable, the so called twist is not up to the level. It didn't work for me.. #I #Ithemovie. The Villains are cliched.. Missing freshness in their writing.#I is probably the most unsatisfying work from Shankar. It's a personal view..

#I First half completed in Andhra (Premieres). Pre-Interval fight and 2 songs picturisation are said to be nice. Rest is below average.