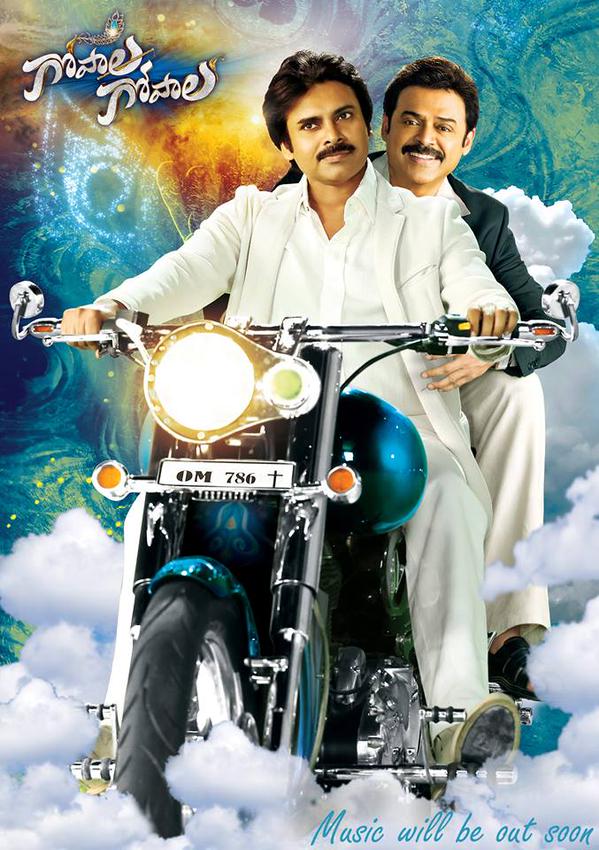 The music of the much awaited Telugu movie "Gopala Gopala" has been released. The film, which stars Venkatesh and Pawan Kalyan in the lead, is a Telugu remake of Bollywood movie "Oh My God".

The movie is directed by Kishore Kumar Pardasanay and the music of the movie is by Anup Rubens. The album has a total of three songs and one theme music and the songs of the movie are sung by Haricharan, Kailash Kher and Sonu Nigam.

"The album begins on a groovy note with gripping rhythm comprising of tabla, live drumming and desi beats. The track has an instant likeability factor with respect to philosophical lyrics as well as notable orchestration. Despite the 90s flavor, the track appeals well with its impressive presentation." - Behindwoods

"The first song in the album is the festive number Bhaje Bhaje. A highly energetic number which is set amidst colorful celebrations is quite catchy and sets the mood of the film right. The best part of the song is the chorus, which gives a tremendous boost to the tempo of the song" – 123Telugu

"Mostly Pawan Kalyan's entry song in the movie, the music bit of this song was released with the teaser and it became a sensation, tune is just okay but the music bit complementing it is totally soothing, Haricharan's voice is added advantage for this song, lyrics are neat describing lord Krishna's greatness and another character questioning his abilities."- DailyIndia

"Haricharan's voice is added advantage for this song. One of the songs from the film, Bhaje Bhaje was unveiled on the internet and it has become a huge hit with the audience."- Boxofficemoney

"An interesting track which takes on the age old superstitions which plague our country in a fun manner. Kailash Kher does a phenomenal job in diction as well as the tune department. The lyrics are fantastic which makes the listener re think about the lifestyle and blind superstitions in style! The folksy tune makes a long lasting impact in great ease." – Behindwoods

"The second song and probably the best song of the album is Enduko. Sung by the super talented Kailash Kher, this song will hit you instantly for the first time you listen to it. Kailash Kher's enigmatic voice and meaning lyrics only add to the essence of this song. As the story has a devotional touch, the orchestration has been done keeping the satirical theme in mind." - 123Telugu

"This is a satirical song on our religious myths, lyrics are interesting and good to hear in Kailash Kher's voice, music is mediocre but overall song is adorable for its lyrics, this might be Venkatesh's question to societely about god and their beliefs in the film."- DailyIndia

"This is a satirical song on our religious myths, lyrics are interesting and good to hear in Kailash Kher's cosy voice made it must listen , music is mediocre but overall song is adorable for its lyrics."- Boxofficemoney

"A solo sung by the supremely talented Sonu Nigam arrives next. The track retains the philosophical and inquisitive nature of the album in effortless manner. The timely usage of flute is another highlight of the composition. A special mention is definitely needed for the thought provoking lyrics. Usage of Carnatic Raaga Charukesi is another master stroke by the composer."- Behindwoods

"Last song in the album is Neede Neede, which is a typical montage song which depicts the pain and sorrow in the film. Singing is quite effective and once again, lyrics have a lot of depth. Anup Rubens has once again made sure that the music is quite Indian. Interesting aspect of the song is the sufi touch which completely gels with the theme of the song." – 123Telugu.com

"Its delight to hear Sonu Nigam's voice after much gap in Telugu, this seems to be climax song in the movie, tune is not appealing and so song, this appears to be montage song so we need to wait for its picturisation. Lyrics are just okay and one more very normal work from Anup."- DailyIndia

"Sonu Nigam a bollywood's versatile singer crooned after much gap in Telugu, this seems to be climax song in the movie, tune is not appealing and so song, this appears to be montage song so we need to wait for its picturisation. Lyrics are just okay and one more very normal work from Anup."- Boxofficemoney

"A fun filled flute instrumental track graces this experimental album. The overall energy it creates is highly commendable. The slight touch of Bhaaje Bhaaje in flute in the midst of electric guitar is done quite well."- Behindwoods

"Instrumental theme and most probably BGM of the movie, this music bit will make fans go gaga in the theater for Pawan Kalyan's entry, beat is nice with full of energy and music is same of Bhaje song."- DailyIndia

"This music is sure to make fans go gaga in the theater for Pawan Kalyan's entry, intense beat with full of energy will thrill audience during watching movie show and the music is same of Bhaje song. Overall the music is quite good and totally refreshing from Anup side."- Boxofficemoney