Fact-Check: Earthquake in Srinagar, not a blast; divided opinion in valley

Massive jolts rocks J&K's Srinagar, creating panic among residents. But many suspect it was a blast. Here's the truth.

Panic struck Srinagar residents as strong jolts rocked the valley. While the ESMC, independent organization that tracks real-time earthquakes, confirmed it was an earthquake that hit Srinagar, many speculated that it was a bomb that went off.

According to National Center for Seismology, it was a 3.6 magnitude earthquake that rocked the valley.

Many residents of Srinagar shared reference to a letter about disposing over 100kgs of bomb as the reason behind the strong jolts felt in the city. In the said letter, residents were advised to stay indoors during the practice demolition of 100-120kgs bomb. "This is a planned exercise and part of essential training activity," read the advisory.

Several eyewitnesses claimed to have heard loud jets flying by right before the strong jolts in Srinagar, which led to the speculation about it being more than just an earthquake. A lot of people expressed shock and said were shaken by the incident. 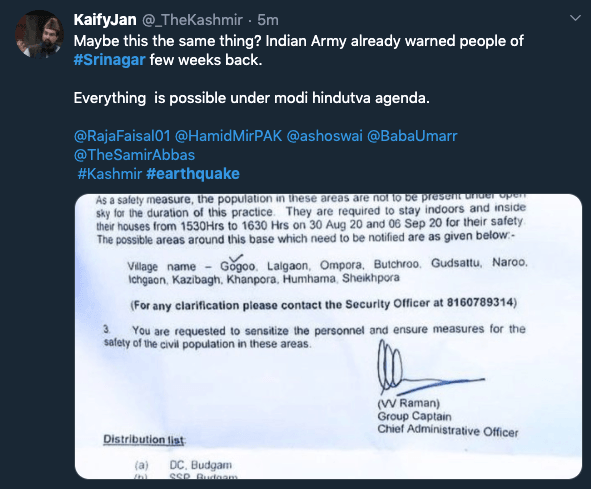 Contrary to what many Srinagar residents are speculating, ESMC confirmed that it was an earthquake and the agency even shared the map of where the jolts occurred based on reports. "20 min shaking was reported in the area of Srinagar (map above represents eyewitnesses report). We have no reason not to believe it is an earthquake at this stage. It is likely below M4.5-5 otherwise we'd have located it already," ESMC tweeted.

The National Center for Seismology confirmed that a 3.6 magnitude earthquake occurred in Srinagar, further confirming that it was not a blast.

Another major giveaway is the letter itself, which clearly gives a different date.

Blast in Srinagar; strong jolts felt in the valley

False
Suggested Articles
Why advertise with us?
most popular