The world's second-tallest building turned into the world's most expensive man-made waterfall when Shanghai Tower in China started leaking inside, causing damage and chaos.

China's tallest building, Shanghai Tower, was the centerpiece of criticism when over fifty floors in the building were flooded and videos of the chaos were widely shared on globally-accessible social media platforms. Local Chinese news outlets reported the leaks inside the 128-story tower started on Monday.

The videos of Shanghai Tower being flooded showed water dripping from the ceilings and destroying office equipment and electronic devices. The videos show "rain" and "waterfalls" inside the world's second-tallest building, The Epoch Times reported.

Shanghai Tower's official page on Weibo acknowledged the issue with the leakage in the building and identified an equipment failure that caused the leaks. The tower claimed the emergency repairs started immediately and the problem was fixed. As a result of temporarily shutting down some elevators, operations of some tenants were affected.

Netizens, both from China and around the world, criticized and mocked China's prestigious tower. 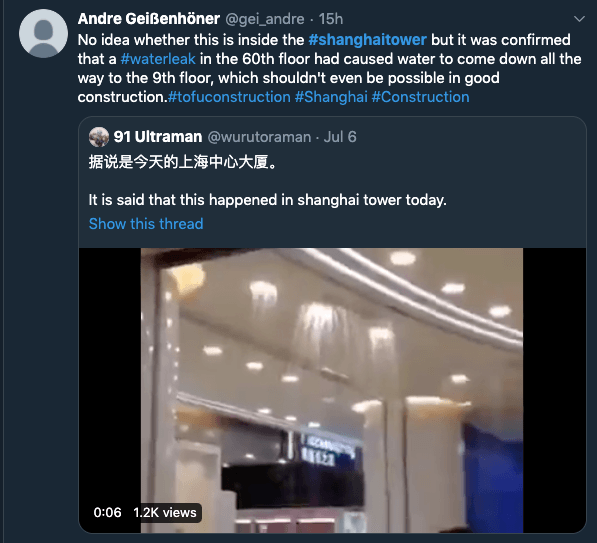 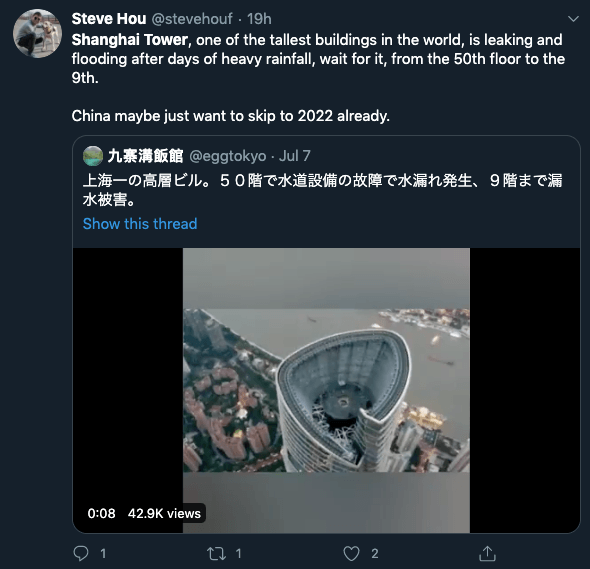 Shanghai Tower is the world's second-tallest skyscraper, only after Dubai's Burj Khalifa. Shanghai Tower is 632-meter high, and Burj is 828-meter tall. Its construction was completed in 2014 and it cost a whopping $2.1 billion. Despite its fascinating structure, viewing deck, fancy elevators and such, the twisting mega-scraper has been marred by a low occupancy rate.

First, the lack of full fire certifications from local authorities kept tenants at bay and the operating losses put the tower in more than $1.5 billion in debt. Then there was the design of the building, which required tenants to pay for larger floor space that simply couldn't be used. It was found that only 50 percent of the floor space was effectively used when tenants had to pay for the entire area, site inspectors found.

The half-lit skyscraper was not the sight many imagined. The structure clearly lost its charm as darkness struck in the night.